5G FORUM > 2022 > SEVILLE AND MÁLAGA, SMARTCITIES OF REFERENCE IN EUROPE, COMMIT TO THE DIGITALIZATION OF THE CITY AND COMPANIES THROUGH 5G 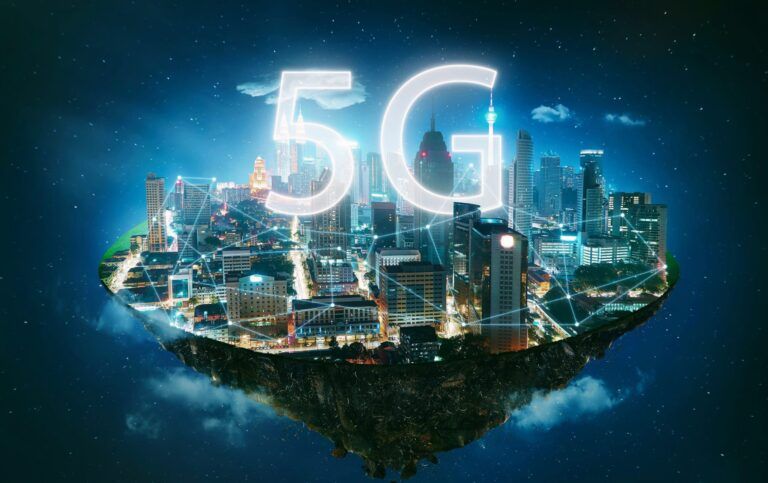 SEVILLE AND MÁLAGA, SMARTCITIES OF REFERENCE IN EUROPE, COMMIT TO THE DIGITALIZATION OF THE CITY AND COMPANIES THROUGH 5G

The last day of the 5G Forum 2022 was attended by cities that are clearly committed to 5G technology. Seville and Malaga have shown the projects they are carrying out as leading cities in relation to this technology. The Junta de Andalucía has also been the protagonist in this last day.

The last day of the 5G Forum 2022 has made it possible to show the full potential of large cities in Andalusia in reference to 5G technology. Seville and Malaga have been protagonists in this conference exposing the 5G projects that they are carrying out. Also, the Junta de Andalucía, 6G-IA and Mobile World Capital Barcelona have been present on this last day and have reflected on the 5G spectrum.

This last day was inaugurated by Rocío Díaz, General Director of Digital Economy and Innovation of the Junta de Andalucía, who has shown that the Junta is very aware that the digital transformation of Andalusia is essential to guarantee the well-being of Andalusian society and economy: “Seville and Malaga were two of the first 15 Spanish cities in which the first commercial 5G network in Spain was deployed and they were also the first in the European market.” 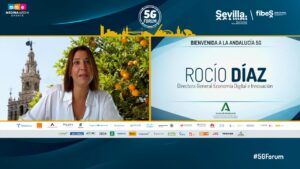 For Díaz, 5G has posed new challenges that require public and private initiative to reinforce their commitment to the development of the most advanced technologies: “With the high data speed and ultra-low latency of these networks, we can imagine the amount of applications that will come in the future, for example cases such as industry 4.0, smart cities or more specific applications, such as autonomous cars, virtual reality or remote surgical operations”.

Díaz, assures that the Board wants to bet on new challenges related to 5G in Andalusia: “The priority sector is agriculture, because the activities offered by 5G for application in this sector are multiple and it will gain in speed of reaction to any pest . What 5G offers is that immediacy, in the reaction and in the performance.”

Subsequently, it was the turn of the city of Seville with an interview with the mayor of the city of Seville, Antonio Muñoz, who spoke about the fact that the 5G Forum was held in the capital of Andalusia: “We consider that it is a very important event for our city ​​and for the challenge we have of digital transformation of our economy and also for the application of this 5G technology”. 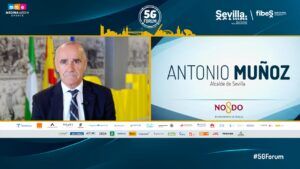 From the City Council of Seville they have a clear will, Antonio Muñoz has assured: “We consider that this type of event can place us in a tremendously competitive position in the face of the challenge that 21st century cities have of digital transformation”.

After the mayor of Seville, Francisco Fernández Lineros, General Director of Digital Modernization of the Seville City Council, Juan Becerra, Institutional General Director of Servinform and José Ayub, Co-Founder & CEO of Galgus; They have talked about the 5G projects that are being carried out in the city of Seville.

Fernández Lineros has stated that Seville’s approach to digitization is comprehensive: “We want to digitize the city so that citizens live better. The concept of smart city is fundamental. The city must function like a human body. “Ultimately, having a global vision of how the city behaves is essential”. 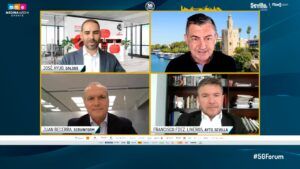 Fernández Lineros has put Isla de la Cartuja on the map of Seville as the fundamental epicenter of 5G in the city: “On Isla de la Cartuja we want to develop not only a technological test, but also a business model. For us, having a 5G network, even if it is only on the island of La Cartuja, presents multiple opportunities. Being able to turn this space into an innovation park where companies could come to test their technological car, for example”.

Subsequently, Juan Becerra, Institutional General Director of Servinform, commented that his company is in a phase of experimentation with 5G technology: “As a service company, this new technology presents itself as an opportunity and we have to be prepared for the needs that are going to be generated to our clients related to 5G”

Finally, José Ayub, Co-Founder & CEO of Galgus, commented that in the case of business, what really matters is being able to innovate at the speed at which digital businesses are evolving. 5G tries to address immediacy: “From our companies we believe in networks defined by software. Since through these new functionalities, optimizations, intelligence and analytics can be added. We are very powerful in advanced analytics. We allow, with the same network that is providing services to the user, to offer geolocation data, people counting, mobility, control of tourist flows.”

After Seville, it is Malaga’s turn as a leading city in 5G technology. It began with an interview with Antonio Quirós, Coordinator of the National Digital Content Pole of Malaga, who is already 5 years old this year: “I define this as an adventure, because talking about virtual reality in those years was an adventure, but we have fulfilled the objectives”. 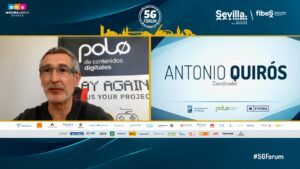 For Quirós, 5G has changed the way of experiencing video games in 360 degrees: “5G is essential for the video game sector. The video game has been discovered as a top-level leisure activity, which more and more people play. We are talking about the video game as a language for the new evolution of the metaverse. They help in terms of even education and health. 5G is changing the shape of 360 degree video gaming. The way to buy it, the way to share it, the way to download it.”

Romero, Account Manager of inONE, explained why it is a leader in the world of golf: “inOne is the most complete marketing platform for golf courses that exists. It allows creating new audiences, segmenting them, impacting them by studying their DATA and retain them, enhancing your digital channel and generating new sales automatically, without more work or extra processes. 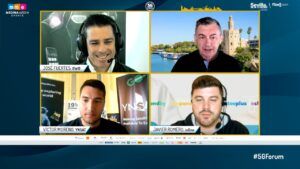 Moreno, CEO – co-founder of YNSAT, has presented the MapiBlock project created by his startup: “It is a digital educational software aimed at primary and secondary school children that makes up the main product of the Ynsat company. The tool gives access to all the power of satellites through an easy-to-use and educational system aimed at children between 8 and 14 years old and their teachers. With the tool we intend to reduce the digital gap and encourage interest in higher education in STEM (Science, Technology, Engineering and Mathematics) in children to reduce future gender differences in this area.

Finally, Fuertes, Founder and CEO of OWO Game, told us about a new haptic system patented by his company in relation to the world of video games: “It is related to the sense of touch to experience sensations with video games. Our mission is to turn the virtual world into the real one. We offer more than 30 different real physical sensations. In such a way that it does not matter if you are in the metaverse, playing a video game, in a smart city or in military training, the user will be able to feel those real physical sensations.

Subsequently, Araceli García, CEO of Axión and Lineox and Esther Cumbrera, Councilor for Urban Habitat and Infrastructure of the Huelva City Council, spoke about 5G technology in the city of Huelva. 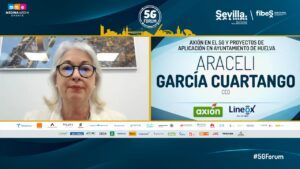 García spoke about the 5G business lines in which Axión is immersed: “We have a critical communications service, where 5G will allow us to offer additional services to our customers. In addition, we have extensive experience in IOP, based on the need to create and monitor our own network, which we have expanded into a line of business that is growing very quickly”.

For the CEO of Axión, 5G will serve as a connectivity layer for new projects of this technology: “We are already immersed in a 5G project for different clients, for example, security operations for the spring festivities in Seville, public lighting control systems or smart buildings.

The 5G world is here

Carles Antón, a member of the Governing Board of the 6G-IA, which is an association of telecommunications operators, equipment manufacturers, small and medium-sized companies, research centers and universities that have a common interest in the development of communication systems through R&D activities. “Right now we are working on the development of future 6G systems and hence the name of the association. Currently the association has almost 170 partners, including Ericsson, Nokia Huawei and Orange, to name some of the main representatives at European level. 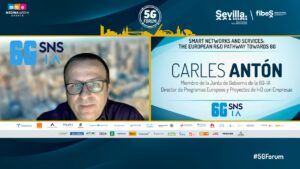 Antón has assured that the objectives of this association are “to ensure that Europe has a predominant place and a leadership profile in the development of 5G and in the future of advanced 5G and 6G networks. For this, it is necessary to create an ecosystem in which not only actors from the ICT area are present, but also other vertical companies represented”.

The 5G Forum 2022 was closed by Eduard Martín, CIO and Director of the Intelligent Connectivity Program at the MWC in Barcelona, ​​who reflected on the present and future of intelligent connectivity: “there are two great protagonists in reference to this world: one is the intelligent 5G connectivity and, on the other hand, the forecast of five billion mobile Internet subscribers in the year 2025 and many of them will be using 5G technology and the second big milestone is to see how the services that are going to need connectivity advance intelligent in the coming years, in this sense I believe that the metaverse will continue to be very protagonist ”. 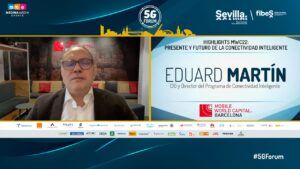 This fifth edition of the 5G forum can continue to be enjoyed on the Medina Media Events Platform, the organizer of the event. The 5G Forum is a privileged opportunity to publicize the successes of each initiative, each company, each university, each project and each city, in an event of international reference and with a first level showcase. It is promoted by Sevilla City Office and Fibes. It also has the support of Telefónica, Orange, American Tower, Viavi Solutions, Ericsson, Capgemini Engineering, Qualcomm, Mavenir, Rohde & Schwarz, Keysight Technologies, Netmetrix-Spirent, Cisco, Huawei, ZTE, Malaga City Council, Digital Content Center , Fycma, National 5G Observatory, Cellnex, Advantech, Ateme, TOTEM, Dekra, Televes, Hispasat, Nokia, JVC, Toshiba, Axión, Impulsa Vision RTVE, OFG and Evolved 5G.

THE 5G REVOLUTION IN CONNECTED MOBILITY AND INDUSTRY 4.0, AT THE FOURTH DAY OF THE 5G FORUM

THE CHALLENGES OF TELECOMS, THE DEPLOYMENT OF 5G IN SPAIN AND THE REALVERSE, AT THE THIRD DAY OF THE 5G FORUM IN SEVILLE

THE 5G IN SPAIN, THE 6G IN EUROPE AND ITS ENERGY EFFICIENCY, PROTAGONISTS OF THE SECOND DAY OF THE 5G FORUM

SEVILLE PREPARES TO RECEIVE THE 5G LEADERS TOMORROW AT FIBES