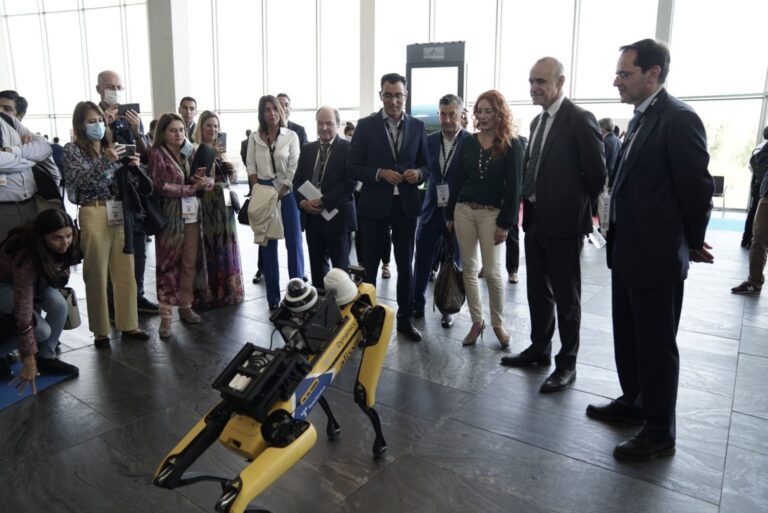 The 5th edition of the 5G Forum has reached the best figures in its history, with its sights set on 2023… and beyond As soon as the lighting of the April Fair in Seville was turned off, the 5G Forum, held from May 9 to 13, was turned on at FIBES-Seville. And as soon as it was finished, Medina Media Events, the organizer and owner of the event, has announced that it is already working so that the sixth edition of the main multidisciplinary, specific and exclusive meeting on 5G that is held in Spain returns to Seville on Monday after the Fair of 2023.

And it is that this fifth edition, held in a “hybrid” format (face-to-face and virtual) for the first time at FIBES-Seville (the first two took place in Malaga and the next two were virtual due to Covid-19), has far exceeded data from previous editions: 65 speakers (20% women), divided into 37 presentations, 8 panels and 23 live question and answer sessions, hundreds of B2B meetings and webinars.

In total, the Seville and 2022 edition of the 5G Forum has greatly increased its participation compared to the 2021 edition: It has reached 837 professional participants, from more than 250 companies, represented by the highest levels of each fame. of “exclusive”, the majority profiles have been CEOs, CIOs, CTOs, and directors of Innovation, Business, Product, Strategy, Marketing, as well as consultants and researchers.

The international relevance that the 5G Forum has achieved in its four previous editions has attracted sponsors from multinationals from the United States, China, India, Taiwan, Japan, Turkey, Germany, Sweden, France, and the United Kingdom in this edition of Seville in 2022. , Sweden and Spain. All of them interested in the Spanish technology market.

“We have found an outstanding and courageous response to this 2022 edition and all the companies that have participated have told us of their interest in being at a higher level in the next 2023 edition. The 5G Forum has been, is, and will continue to be , one of the few opportunities to publicize the successes of each company, each multinational, each city and each research project; in a reference event. It is a first-class showcase”, advances Ricardo Medina, CEO of Medina Media Events, which since 2018 has organized the main specific national meeting on 5G, which is held two months after the Mobile World Congress (MWC) in Barcelona.

In addition, the Medina Media Events platform received 4,833 visitors in the first week alone, from 50 countries. Visits from the United States accounted for 5%. From Spain, 72% of the visits have taken place, from all the Spanish autonomous communities, highlighting Andalusia, the Community of Madrid and Catalonia.

“All conferences, panels, webinars, etc., including those of all our recent and previous technology events, are accessible and free to everyone (registration required) on our “Netflix of New Technologies” 24 hours a day. 365 days a year, so they can access at the time that best suits their busy schedules”, highlights María Medina, General Manager of Medina Media Events.

The most international edition

In addition, attendees and sponsors have been able to network with other companies and contrast opinions with a wide range of experts, such as the European Commission, the Ministry of Economic Affairs and Digital Transformation, universities, businessmen and entrepreneurs on 5G technology.

In addition, they have been able to see first-hand the advances of large companies in reference to this technology: such as a robot dog, autonomous cars or the world of the Realverso. Also, you have been able to find out how 5G is being applied in different sectors such as audiovisual (through UHD Spain or RTVE), industry or the automotive industry. Finally, it has been able to discover the best 5G projects that are being worked on in Europe, Andalusia, Extremadura and many other places.

Large public institutions in this edition.

If the fifth edition of the 5G Forum has been a success, it has also been thanks to the presence of cities that we can now call “5G Cities”. Leading city councils in this technology such as Seville, Malaga and Huelva have been very present this week: Seville, with its mayor Antonio Muñoz at the helm, Malaga, with all the projects launched from the Digital Content Pole, and Huelva, hand in hand from the CEO of Axion and Lineox. Araceli Garcia Quartango. 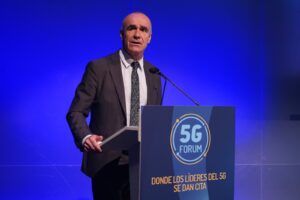 On its opening day, Antonio Muñoz, Mayor of Seville, assured that “this 5G forum can be held in Seville because it will be unequivocal proof of the commitment we are making to everything related to innovation”. 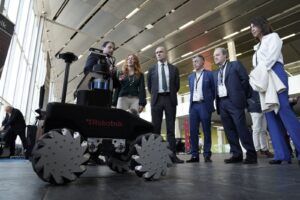 The Ministry of Economic Affairs and Digital Transformation, through Arturo Azcorra, General Director of Telecommunications and Management of Audiovisual Communication Services, and Antonio Fernández Paniagua, Deputy Director General of Planning and Management of the Radioelectric Spectrum, has once again participated in this Fifth edition. And of course the European Commission through Peter Stuckmann, Deputy Director Future Networks.

All attendees have had at their disposal the papers issued and the presentations shared by the speakers as soon as the end of each session, to which they will continue to have access until the next edition.

The 5G Forum Virtual platform, developed by Medina Media Events, will remain permanently active so that all participants can keep in touch and have access to new content in a professional and exclusive environment: virtual.5gforum.es

SEVILLE AND MÁLAGA, SMARTCITIES OF REFERENCE IN EUROPE, COMMIT TO THE DIGITALIZATION OF THE CITY AND COMPANIES THROUGH 5G

THE 5G REVOLUTION IN CONNECTED MOBILITY AND INDUSTRY 4.0, AT THE FOURTH DAY OF THE 5G FORUM

THE CHALLENGES OF TELECOMS, THE DEPLOYMENT OF 5G IN SPAIN AND THE REALVERSE, AT THE THIRD DAY OF THE 5G FORUM IN SEVILLE

THE 5G IN SPAIN, THE 6G IN EUROPE AND ITS ENERGY EFFICIENCY, PROTAGONISTS OF THE SECOND DAY OF THE 5G FORUM

SEVILLE PREPARES TO RECEIVE THE 5G LEADERS TOMORROW AT FIBES